Llanfendigaid sits wrapped in its own bluebell woods in the Snowdonia National Park - less than a mile from the beautiful Welsh Coast.

The main house sleeps 17 people. If fully occupied, price per person per night is usually between £11 and £79.

Suitable for low key wedding breakfasts and receptions with up to 31 people in all.

Additional fees may be applied for events; please enquire for details.

The main house at Llanfendigaid was built in 1746, and its outbuildings have been sympathetically restored as further guest accommodation.

The estate is suitable for holidays with family and close friends, or for a special celebration.

The main house sleeps 17 people in 9 bedrooms with two bathrooms and two further separate loos. Downstairs there is a comfortable drawing room, large dining room (with long table and benched seats), and a large kitchen with an oil-fired range cooker.

The house is surrounded by wooded gardens (with bluebells in the Spring), and there’s plenty of outdoor space for a BBQ or picnic.

There is also a heated swimming pool for the house and cottages to share, and a table tennis table.

“Llanfendigaid is on the southern end of the Snowdonia National Park, and the sea-views from the house are extraordinary.”

The estate is off the main coastal road, the A493, close to the town of Aberdyfi. The nearest train station is Tonfanau, which is about a mile away. The owners of the house very much recommend taking the train, as the route is one of the most beautiful in the UK.

Snowdonia National Park offers lots of distractions, such as pony trekking, climbing, walking, mountain biking and road cycling. The nearby town of Aberdyfi has a few shops, and a great sandy beach with dunes to play hide-and-seek within.

For any guests interested in murder holes and looped battlements, the hills around Llanfendigaid boast the most amount of medieval castles.

For train enthusiasts, there’s the Great Little Trains of Wales, in which you can take lots of trips on trains that originally pulled slate from the mines.

If you’d like to have a simple day, the shingle beach is a mile from the house, and the walk to it is lovely.

The Nanney-Wynn family have owned the Llanfendigaid Estate for almost nine hundred years. At its largest, the estate once reached along the Welsh coast from Harlech in the north, to Aberystwyth in the south. Now, the estate is contained within the Snowdonia National Park.

The main house at Llanfendigaid was re-built in 1746 (it had been a ‘Welsh Long House’ up until then). Stable Cottage was originally built as stables (as you’d expect) in 1892, and Dove Cottage dates from 1868. The Cow Shed is thought to date from around the 1740s. 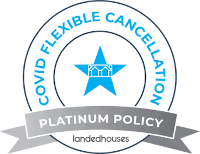 The current owners have a grapeshot that was dug out of the lungs of ancestor without anaesthetic after a battle in 1799 - he still lived to a ripe old age!

Beauty a view of beach ！

Loved our 5 days here. Very quiet and tranquil. Lovely walk down to the beach and a walk behind the house opposite up a hill to overlook the sea. Loved watching the sun set from here. Sheep in the next field to us very nice new swimming pool to use at a little cost. Would definitely recommend and visit again

Enquire
This house usually responds within 4 hours. We'll follow up for you if there's a delay.
Visit Website
Phone Number
07463 441455
Email Brochure
Back